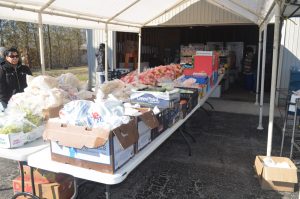 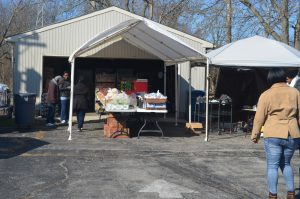 Objective: Simple, follow in Jesus’ footsteps and feed the multitude.

Mission: Fill the cupboards of the people of Pike Township so their focus can be on God, family, and jobs/better jobs, not on where their next meal will come from.

Serving Times:We are open from 11:00 am ‘til 1:00 pm. (Or the food is all gone)To better aid you in when to come, the registration number service is asfollows:

Luke 9:12-17, Now the day was ending, and the twelve came and said to Him, “Send the crowd away, that they may go into the surrounding villages and countryside and find lodging and get something to eat; for here we are in a desolate place.” But He
said to them, “You give them something to eat!” And they said, “We have no more than five loaves and two fish, unless perhaps we go and buy food for all these people.” (For there were about five thousand men.) And He said to His disciples, “Have them
sit down to eat in groups of about fifty each.” They did so, and had them all sit down. Then He took the five loaves and the two fish, and looking up to heaven, He blessed them, and broke them, and kept giving them to the disciples to set before the people. And they
all ate and were satisfied; and the broken pieces which they had let over were picked up, twelve baskets full.
(American Standard Version)

We are not by any means suggesting that there will be a seven year famine. However, what Joseph told Pharaoh to do is a wise thing. We went through the drought in 2012, which lessened the food quantity. Crops of vegetables were burned with the hot dry weather. Less vegetable crops meant less food for the herds to eat, therefore there was less meat, of course, at much higher prices. Thus, the inception of the
JOSEPH PLAN PANTRY.

Food Give Away Dates

1.Fill out the Joseph Plan Pantry Registration Form.
On your first visit to the Pantry, you are to bring:
- Filled out registration form (paper copy only). Registation forms are also available at the panty.
- Picture ID Required
2. Once you register with the Pantry, you can come each month.
3. You will receive your personal Pantry card the next month.
4. Picture ID is always required to participate.

Evangelism available at the Pantry